Marsie's cards include a recipe and she says that all background color was done with food coloring and she used a kitchen scrubber and paper towel tube to make marks, and she wrote the word recipe with a piece of spaghetti.  How cool is that? 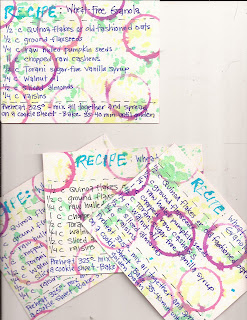 Gina's cards are an eye-spy game.  She says she used 6 or 7 kitchen items per card and challenges her recipient to guess what they are. 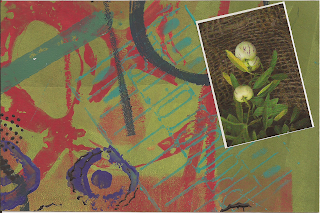 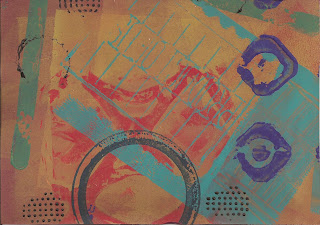 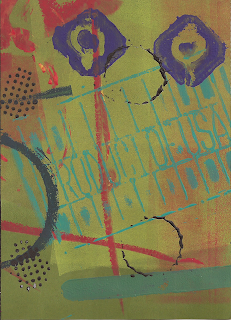 Now please forgive the lousy photos of Katie's amazing postcards.
They are sooo cool, but very hard to scan.
See the swirly pattern?  know what it's made of?
colored and crushed elbow noodles.
and since it's rather lumpy and fragile, Katie put each card inside a clear cellophane envelope, taped her message to the outside of the envelope, and included secret goodies inside.  She made seven of these postcards!  Here are two examples: 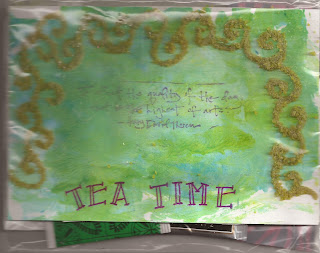 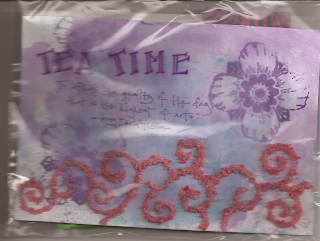 Lynn's postcards made use of such items as a plastic fork, netting, bottle caps, a crumpled wrapper, a chopstick, a birthday candle and broccoli.  Yes, broccoli.
(she made five cards but I can only find the scan of these four and I'm too tired to re-scan) 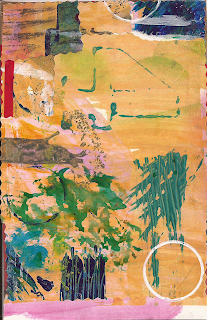 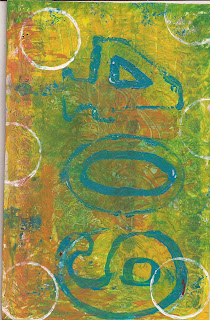 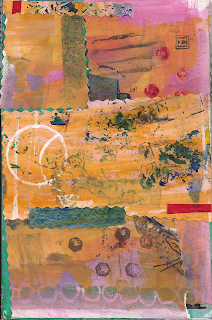 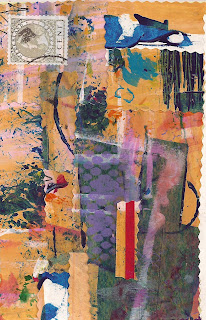 Carol's card features stamps made with zucchini.
She titled the card "pickles" because she loves to can, and you can see her garden bounty (as well as her art and other creative endeavors) on her blog. 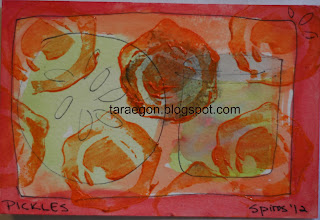 So forgive my delay in getting these out to you guys.  Re-entry after vacation is always a bit bumpy.  Lots to catch up on.
Plus, you wonderfully prolific artists made more cards than the number of participants and I don't want to mail anyone their own cards back, so I'm going to jump into the swap and send you all one of mine and keep one of yours in return.  But I haven't finished my cards.  I'll get the swap done in the next few days and post my pictures here.
Thanks for your patience!

Simply marvelous...I really struggled with this one and mine are on the way, but these ladies are pure inspiration. Pressure, I am buckling under the pressure of all this creative goodness. xox

Karen - you get to take all the time you need!! Thank you again for doing this. I look forward to seeing them whenever they are ready. "Wheneva!" (channeling my inner-Beantown-child accent!)

The "formal" group-swaps on this site (listed under the ACTIVE GROUP SWAPS tab) are open to everyone. We focus mainly on paper-based swaps with a quick turn around time (such as postcards, ATCs, tags, inchies, etc.). ALL LEVELS OF EXPERIENCE ARE WELCOME. Please do not send suggestive images, nudity; images related to magic, witchcraft, occult, drugs or alcohol; profanity, or partisan political statements in the formal group exchanges, out of consideration for others, especially viewers of various ages who sometimes view our site or participate. The ideologies, viewpoints and beliefs represented by participants' art are not necessarily those of the Blogsite Administrator who retains the right to determine if submitted art is suitable for public viewing.
In order to guarantee that everyone who makes something for a group swap receives something in return, all group swap items are sent to a host who then mails them to others in the swap. There is no required sign-up process. Just mail out your item(s) to the swap host by the date listed for each swap. All currently open group swaps are listed under the "Active Group Swaps" TAB at the top of the Home Page. Select a swap title to see descriptions of the theme or technique challenge for each active group swap. You can scroll down to the bottom of the Homepage and click on OLDER POSTS to see more pictures of mail art received. The "Archived Group Swaps" TAB at the top leads you to descriptions of previous group swaps we have completed.