Scavenger Hunts are lots of fun as we scramble to find the things on a list, trying to end up with the most items and win a prize.

We have had at least two Scavenger Hunt challenges in this group.  Rather than a list of items to find, we were all given the same letter of the alphabet as a guide:  the letter "S" in April of 2014, and the letter "M" in March of 2015.  Items found and used for COLLAGE had to start with the letter that was designated.  Text did not count.

You can type "Scavenger" into the search bar on the MMSA home page, half-way down on the right side of your screen to see some of the art that came in for those previous swaps.

The prompt for this swap is the letter "L."

Your collages need to be made by gluing/adhering images that pertain to the letter "L" to any background.

This swap is NOT about drawing/painting stamping/stenciling  images.

Please do NOT go online and pull images off the Internet,  and, this is not a swap for digital art.

1.  Look through magazines, junk mail, old books, labels, advertisements, etc. for images of things that start with the letter "L."  I would prefer originals, not copies.  WORDS or TEXT do not count, although you may include them for interest's sake.

2.  Include at least ten (10) images starting with the letter "L" on the front of your postcard. 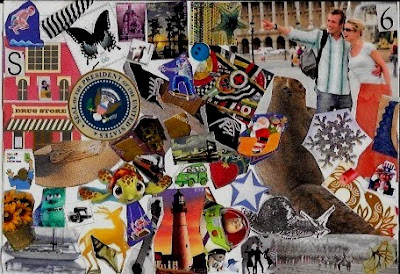 3.  On the back (the message side) list each item starting with the letter "L" which you included.

4.  Make 1 - 4 cards to be exchanged with your designated swap partners.

5.  After the swap is completed, there will be a (small) prize sent to the participant who has the most images that start with the letter "L" on at least one of her/his post cards.
Posted by KR at 3:36 PM