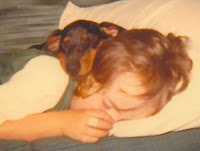 This is Gina and her beloved buddy Schnapzie when Gina was around 4 or so.

40+ years later Gina comes to you fully entrenched in the international MailArt world, loving every minute of sending and receiving MailArt and correspondence.  She moved to different states a bunch as a kid, so she was always leaving family and friends, and learned to love writing and receiving letters.  She is also loving writing letters again with her Papa and her early childhood BFF :D.  She is grateful for every piece of MailArt and correspondence that has landed in her mail box, as she can appreciate the time and effort that has gone into every simple and complex piece.

And she can’t thank Ms. MMSA (Karen) enough for urging us all along a bit further in our creativity and desires to connect with each other via MailArt.

Gina loves anything related to vision, eyes, low vision, blindness, vision rehabilitation, independence for persons of all abilities and in all areas of the world, and perception – this having a lot to do with actually loving her job in the field of low vision and blindness rehabilitation.   She also loves bicycling for transportation and exercise, swimming, knitting (relegated to history cuz of MailArt right now! :D), being outdoors in almost all weather, Hawai’i and world travel, and good provocative/healthy discourse, just to name a few things (in case you are ever at a loss for MailArt ideas to send to her :D).

Gina only became comfortable considering herself an “artist” a few years ago.  She’s dabbled in MailArt to family and loved ones since taking some MailArt and other classes via PaperSource in 2002.  Then a grad degree took up spare time, as well as developing the only program in her public health system that specifically works with her clients.  But in 2009 she took many classes with the absolutely fabulous gal and printmaker Katie Gilmartin via her Chrysalis Studios  http://katiegilmartin.com  and began corresponding more with her monotype and linocut print cards to friends and family.  It has been a once or twice a year tradition for Gina to make a new print, and her beloved HoneyBunny to write a corresponding poem for solstice and/or lunar new year cards.  She also shows and sells her prints, the linocuts having been lovingly carved with her Mom’s (R.I.P) antique carving tools :D.

But then, in January of 2011, leafing through the DIY/Creative section of a local independent bookshop, Gina became mesmerized by the book with the three word title, “Good Mail Day” by Jennie Hinchcliff and Carolee G. Wheeler.  Baited, hooked, and sunk for life as I consumed that book in about an hour after getting home.  OMG….  I began looking up names I found of MailArtists in the book, and even made grand attempts to send to many, not knowing that the addresses were often changed in the book.  Of course I sent some things to Jennie (who I am so lucky to have along with me in my home city of San Francisco), based on the themes and postcards available for use in the book, and signed up to receive some of her MailArt packages she was planning for the next six months.

Only little more than a month later I was looking around for more MailArt options online, and soon after that the Japan Tsunami occurred in March 2011.  I hit the printing studio and made tons of postcards to send in support of the people of Japan via the You-Project “For You, With You”  http://you-project.net .  How could I not do something somehow?  I sent some beautiful things, and some things I didn’t think were my best work for one reason or another.   Well, lesson learned on that one.  On the one year anniversary of the Tsunami, the YouProject sent out an email (as they did periodically throughout the past year to show the project progress).  I was still in bed an opened the email to find not one, but two of my “Eh, these are OK, but…” pieces sent to them that were made into street banners that were hung in the streets of Tokyo in support of the people of Japan.  I just started bawling my eyes out; I was so honored beyond what words could say, and more than that, just hoped they brought more joy and hope to the people as they passed on the streets below. 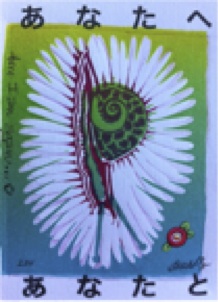 A “Shnelly” I thought was too red and too bright overall…

So backup to May 2011.  Jennie started the SF Correspondence Co-op, loosely based off the principle of the NY Correspondence School by the incredible Ray Johnson in the 1960s.  And you wonder why I love MailArt?  I’m surrounded by fabulous, wonderful, quirky, immensely talented MailArtists of all stripes, and I get to meet with the local ones once a month or so!!!  Since then I’ve also joined another arm of MailArtists who enjoy making Arti-stamps/Faux stamps/Cinderella stamps, which are swapped in our Co-op Passports, and within the MailArt world :D.  Love it.  Who wants to try it and share some with me? :D

OK, back to 2012.  I heard of Karen’s hilarious MailArt through a fellow Co-oper Pamela, so I checked out I am Rushmore online, and signed up with her write :D/right away.  Need I say more?  I don’t think so.  Other than Karen is Absolutely Fabulous.

This was all around the same time as the beginnings of the RMA* Project.  Many MMSA-ers, SF Correspondence Co-opers, and other MailArtists have answered the monthly or bi-monthly ongoing MailArt Call for an average or 150+ residents and patients in a very large acute and skilled nursing rehabilitation hospital.  I hope the project will be able to continue through the end of 2013 (at least!), and hope you’ll consider joining in on the fun. (Click here to learn how.)

Pretty much anything I’ve shared about MailArt, can be found in one form or another via my Flickr site.  Please check out a little or a lot of examples, and I hope to

I leave you with this story of a Mail art mishap:

Recently I was coming home from the East Coast and was working on mail art when one of my pens seemed to dry up.  I did next what I do out of habit at home, not X-hundred miles up in the sky in an airplane cabin.  I shook my pen.  It still didn't work, and I think I shook it again.  Now, mind you, I think I'm a lucky gal, cuz no one was sitting next to me in the two seats to my right (I can't remember the last time THAT has happened!)....  Can you imagine me trying to quietly contain my horrified sucking in air sound as I realized what I had done -- with the proof all over the middle seat tray table and armrest, and the wall panel by the window I was trying to draw when the darn pen seemed to dry up?!?!?!  I tried a paper towel, a wet paper towel, and a hand cleaner towel to clean it up - no luck (OK, so maybe I'm not so lucky).  I seriously considered just not telling anyone and sneaking sheepishly off the plane, but of course I fessed up to the flight stewards and apologized profusely - they said "No problem." Phew (but I'm still waiting for some random cleaning bill from United...!).  Hopefully somebody will have a strange sense of humor like me when cleaning it and think, "Oh, here we go, Gang.  We've got another pen homicide on our case...."

Posted by Karen Isaacson at 5:05 PM

The "formal" group-swaps on this site (listed under the ACTIVE GROUP SWAPS tab) are open to everyone. We focus mainly on paper-based swaps with a quick turn around time (such as postcards, ATCs, tags, inchies, etc.). ALL STYLES OF ART AND ALL LEVELS OF EXPERIENCE ARE WELCOME. However, please do not send suggestive images, nudity, profanity, or political statements in the formal group exchanges, out of consideration for others. Thank you.
In order to guarantee that everyone who makes something for a group-swap receives something in return, all group swap items are sent to a host who then mails them to others in the swap. There is no required sign-up process. Just mail out your item(s) to the swap host by the date listed for each swap. All currently open group swaps are listed under the "Active Group Swaps" TAB at the top of the Home Page. Select a swap title to see descriptions of the theme or technique challenge for each active group swap. You can scroll down to the bottom of the Homepage and click on OLDER POSTS to see more pictures of mail art received. The "Archived Group Swaps" TAB at the top leads you to descriptions of previous group swaps we have completed.